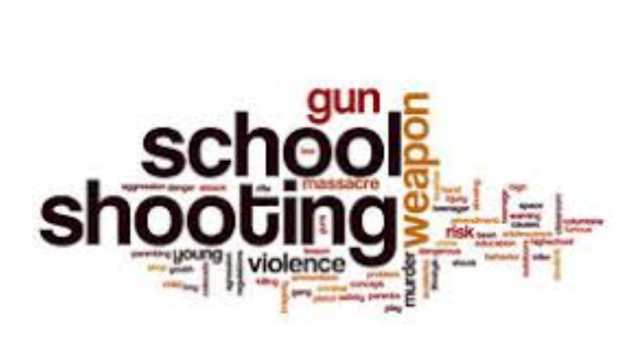 (Disclaimer: Gun laws were not brought up)

Every student in the United States has done simple school drills like earthquake, lockdowns, fire, and shelter in place. These drills are supposed to help us prepare for disasters that can happen at any moment in time during the day. Do they help to teach us what to do in the event of a disaster? Maybe. But do Stacey Students feel prepared for a school shooting?

School shootings are a topic that has recently come into the news, and we hear about them more often than we’d like. As a student, most people would have to agree that seeing this on the news makes the idea even scarier.

Just because shootings have been brought up more recently, sadly it doesn’t mean they are anything new. There are records of shootings from as early as 1840.

Currently, though, an article on CNN by Chip Grabow and Lisa Rose from May 21, 2018, counted how many school shootings have happened between January 1, 2009, to May 21, 2018, in the US vs. Canada, Japan, Germany, Italy, France, and the UK combined. The results are shocking. “There have been at least 288 school shootings in the United States since January 1, 2009. That’s 57 times as many shootings as the other six G7 countries combined.” Below is an image provided in the article of the full count of shooting during that time period.

Seeing this makes you think more about how prepared you are right? The truth is, you will never be fully prepared. 8th grader Alison Davis says, “ The school system has done their best job at simulating a school shooting, but the shock and terror and stress could never be practiced.” While the actual feeling and emotions could never be practiced, 8th grader Emily Saldivar says, “I don’t feel prepared because we haven’t done an active shooter drill in years.”

Drills. Randomly throughout the year, schools will have drills for scenarios such as earthquakes, intruders, active shooter, fires, and more. Living in Southern California by San Andreas fault, here at Stacey we have a lot of earthquake drills, at least two every school year.  With the numbers of school shootings rising, perhaps we should have an active shooter drill every once and awhile. Personally, the last time I did an active shooter drill was in the third grade.

A survivor of the 2018 Santa Fe High School shooting, a student named Paige Curry said, “It’s been happening everywhere. I always kind of felt like eventually, it was going to happen here too.” Some people are asking “If school shootings are more common now than ever, why aren’t schools doing more to prepare students?” While preparing students is very important, if schools can prevent the shootings from happening in the first place, then it seems like a win for everyone.

In an article on govtech.com by Sam Shriver, it says, “ The number one thing we’ve done: we put in a kiosk system in where when you come in you have to bring your [driver’s] license in now. We know everybody who comes in and out of our building.” In the same article, Shiver says, “Many of the improvements deal with how people enter a school building.”

In conclusion, things have been done to attempt to stop school shootings and there is nothing that could ever be done to keep them from happening altogether. The best thing to do would be to continue to try and prevent them but also prepare students on what to do in the event of a shooting. As students, if you want to prepare yourself, then research the topic. Even though we will never be fully prepared, we should try to be as prepared as possible because no one ever thinks things like this will happen to them, until they do.