The butterfly effect.The theory that something as small as a butterfly could launch a sequence of events leading to a tornado. This happened to YouTuber/Influencer James Charles when he accepted SugarBearHair security at Coachella. This contract had him promote the company on his Instagram story. Many subscribers sent this to close friend and Influencer Tati Westbrook. She broke down on her Instagram story. She deleted it soon after. Following the breakdown, the next Thursday, she uploaded a video titled “BYE SISTER.”

The video addresses all the drama between her and James, stating that their relationship was not transactional but in fact, she paid his way to the top, with brand deals and collabs, he started to climb the ladder of fame. She then told of him at her birthday dinner, making explicit comments about the waiter and when she told him that the waiter was straight, James Charles reportedly made the comment, “It doesn’t matter, I’m a celebrity.” WOW! How egocentric and manipulative this can seem to some fans. Tati said she had to call everyone afterword and apologize on his behalf. She repeats that she thought he would mature out of this behavior. Alas, he “didn’t” and it came back for the worst.

Over the following weekend, James lost nearly 3 million in subscribers. Memes started to flood Instagram and basically any social media sites. It was impossible not to know what had happened. The YouTuber was clearly in distress and uploaded a 4-minute video apologizing to Tati. People compared his “fake crying” to another apology video by Laura Lee and Manny MUA.

James Charles was losing subscribers quicker than you could even imagine. James Charles was losing about 15 subscribers every second, meaning, he was losing 900 subscribers every minute! That is about the size of our school! Meanwhile, Tati was gaining hundreds overnight. She reached 6 million with YouTuber Jeffery star cheering her on. With James out of the picture, Jeffery has also crowned most popular YouTuber by default. The tables were turning on James and while some people sympathized for him, most painted, returned, burned, or destroyed his pallets.

After this, James posted a video titled “No More Lies…” where he showed proof of receipts, text messages, and videos claiming that all accusations made against him were false. After this, a reverse effect happened in which James Charles starting gaining followers once again. Tati is now losing some. Jeffree Star was understandably under some heat. He posted an apology video about the topic and said that this ban never happened. Tati is now in some serious trouble.

Almost a day after the video though, a video showing the “receipts” showed they were made and not true. 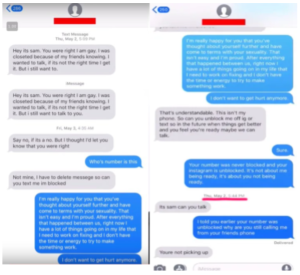 James ran to twitter saying this was because he was traveling and his timezones were mixed up. However, from personal experience, iPhone corrects any mistakes to the timezone you are in presently. James may have gained some subscribers, but still lost the trust of many people including celebrities.