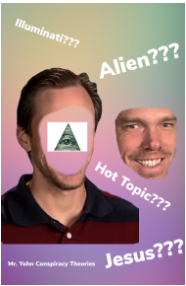 Everybody knows Mr. Yohn as a friendly social studies teacher to eighth graders all over Stacey, but is he who we think he is? Does Mr. Yohn really have a wife, is he a part of the Illuminati, is he really able to run? Let’s find out…

Is Mr. Yohn Part of the Illuminati?:

It may seem obvious when asking if Mr. Yohn is in the Illuminati. There are many sources that the journalism investigative team consisting of Gavin Mercado, Grace Baer, and Annabelle Lona have found.

There is much more where this comes from. He is seen battling the supreme courts in Washington D.C. How could a simple middle school teacher get this far? When did he go there?

Mr. Yohn also claims he is running for President. It is believed that every President of the United States starting with Abraham Lincoln was a member of the Illuminati.

He could be running to get higher on the Illuminati totem pole? Who knows with Mr. Yohn? An average teacher may be more mysterious than you could ever fathom.

There are many rumors that Mr. Yohn is not only a teacher but the holy Jesus Christ himself.

It may seem crazy to think that your very own teacher is Jesus but we do have some evidence to back it up. Mr. Yohn sometimes mentions that he once had long hair, but cut it later on.

Mr. Yohn is known to preach things in a persuasive manner to his class. Almost like delivering messages from the unknown. Are the things he says messages from God? Will the earth die in his presence? Every morning when Mr. Yohn’s car pulls up, a light beams down from the sky onto Hot Topic.

This leads us to our next question for Mr. Yohn…

It seems that nowadays Hot Topic is a favorite among Stacey students. Hot Topic sells high-quality jewelry, t-shirts, etc. However, there is evidence that Mr. Yohn has ties with Hot Topic and is mind controlling his students.

Every class Mr. Yohn talks about going to the mall. For example, during his first two periods, he was questioning whether the students went to the mall for Black Friday shopping. He then pushed them to go back to the mall as they may have still had sales. Is Mr. Yohn the new king of Hot Topic?

If so, Hot Topic must be related with the Illuminati in some form. Which may be strange. Although strange, Hot Topic is a lot more than a store. It may be a place where Mr. Yohn performs rituals for the Illuminati.

There is ample proof from Stacey that Mr. Yohn is an alien. Mr. Yohn moves in an abnormal way when walking around the classroom. Rather than walking normally, his back arches forward when he walks.

Who knows? Mr. Yohn could very well be from Mars.