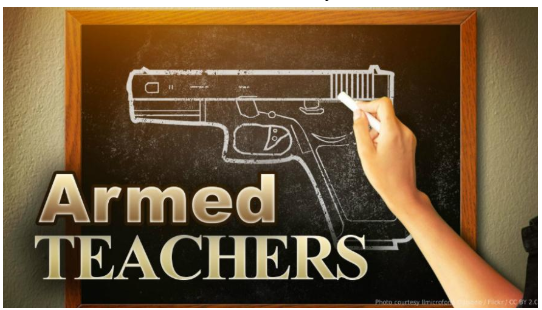 Just in 2017 alone, 65 shootings were reported on school campuses. These incidents have caused many deaths and are some of the most heartbreaking occurrences ever. Students go to school every day with the thought in the back of their mind that there’s a possibility of a shooting occurrence. Parents have similar fear no matter what school they have their child attend. How could we stop the violence and fear?

One solution has been suggested, arming K-12 teachers. Teachers could have protection in the case of emergency. In February 2018, Donald Trump tweeted his support to the topic, “Armed educators (and trusted people who work within a school) love our students and will protect them. Very smart people. Must be firearms adept & have annual training. Should get a yearly bonus. Shootings will not happen again–a big & very inexpensive deterrent. Up to States.”

Some are under the belief that arming teachers will make school more dangerous. One argument made is that weapons may give the teacher a lot of power making them distracted from the safety of the students. In the instance of an active shooter on campus, the teacher would have to leave the students to fight off the offender. Teachers may accidentally shoot unarmed students with all the chaos of the situation. It would be too risky. Additionally, the gun would need to be highly protected making it hard to access which would be an inconvenience for the teacher during the situation.

On the other side of the argument, some state that arming teachers would be beneficial. They believe that having kids and their teacher duck and pray is not safe. Who will protect them? A bullet moves faster than a police car and no one will be able to protect themselves until they arrive. Teachers should have guns in case of the emergency when the shooter gets inside a classroom. There would be no safety if they were not armed. Arming teachers would make the school look less like an easy target for the shooter.

Overall, the argument on whether teachers should be armed is ongoing and heated. Many believe that teachers carrying weapons would make the school less safe, but others argue against that saying it would protect the students. Some schools are already carrying guns, and it could potentially be every school with armed teachers.