A couple of weeks ago on the Cougar Chronicle, readers were able to experience superhero’s in a whole new way with our article, “Superhero Profiles”. The light, or goodness, in the Marvel and DC comics and movies, were delved into and explained with ease.

But no light can exist without darkness, and no good can exist without evil. So strap yourselves in, because this week the superheroes’ counterparts get their time to shine. That’s right, the fabulously malicious supervillains are taking their turn. 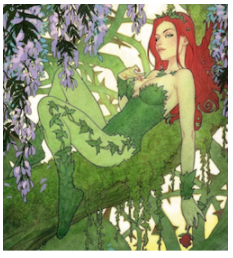 Poison Ivy is a fabulous female supervillain from the DC comic and movie universe. Poison Ivy is probably most well known for her association with the superhero Batman, and her appearances in his comic series. The first appearance she made in a comic was in 1966 in Batman #181, after being created by Robert Kanigher and Sheldon Moldoff.

Poison Ivy is a character that has appeared in many places, including movies, animated TV shows, video games, and of course, comic books. Actors who have played or voiced Poison Ivy include, Uma Thurman, Peyton List, Diane Pershing, and Tasia Valenza.

When Poison Ivy isn’t disrupting the harmony of Gotham, she is known as Pamela Lillian Isley, a Gotham City Botanist. Unsurprisingly, Pamela has an unusual love for plants and acts as an environmentalist. Her abilities as Poison Ivy consist of using plant toxins and mind controlling pheromones, typically with the goal of saving endangered species.

Poison Ivy’s purpose as a character has been on multiple occasions to serve as a love interest for Batman, despite her villainous roots. Other times she is depicted as in love with her dear friend, Harley Quinn. Her purpose as a character was also originally to serve as a strict supervillain, but recently has switched to more of an antihero. WIth recent development, Poison Ivy’s heart is in the right place, but her actions are still very much wrong.

The Joker is a fictional character well known for being in the Batman comics by DC comics as Batman’s rival. Joker, however, wasn’t, meant to be Batman’s archenemy at first. Joker wasn’t even supposed to be alive, as he was meant to be killed off right after he was first defeated. Joker is known as a criminal mastermind who was shown to the world as a psychopath with a very dark sense of humor.

After working alone for some time, Joker thought that he needed some help and recruited his old psychiatrist as Harley Quinn, who was also known for his love interest. One of the most iconic characters in popular culture, the Joker has been listed among the greatest comic book villains and fictional characters ever created.

Joker has had various possible origin stories during his decades of appearances. The most common story involves him falling into a tank of chemical waste which bleaches his skin white and turns his hair green and lips bright red; the resulting disfigurement drives him insane. Joker shows up in plenty of shows, movies, and video games including the 1960s Batman television series where he was played by Cesar Romero, Batman (1989), depicted by Jack Nicholson, and the 2016 instant classic, Suicide Squad, with Jared Leno. Mark Hamill, Troy Baker, and others have been cast as the Joker as well. 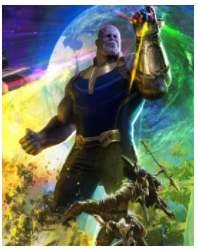 Thanos is a fictional supervillain occurring in the American Marvel extended universe as one of the main villains. The character was created by Mike Friedrich and Jim Starlin and made its first groundbreaking appearance in the comic Iron Man #55.

Thanos can be found almost anywhere you might find the Avengers, such as in comics, on television, in arcade and video games, and on the big screen. Much like other Marvel characters, there are quite a few actors who have lent their voice or face to bring this character to life. This includes Damion Poitier, Josh Brolin, and many other voice actors.

Thanos is an incredibly evil character, with incredibly wrong actions. Despite this, Thanos thinks he is infallible. His goal is to make the universe a balanced, equal place. Sounds pretty nice, right? Unfortunately, he plans to do this by randomly murdering half the population. Both the poor and the wealthy, the average and the gorgeous, and the ignorant and the genius will be at equal risk of murder. . . Yay?

Loki is a fictional supervillain who was created in the Marvel comic book universe and has since been in many other forms of media. He was created by the infamous writer Stan Lee, and the talented scripter Larry Leiber, and penciler Jack Kirby. The first publication of this character was in August 1949 in the comic Venus #6. However, this was of an older version of the character. The first publication of the modern day Loki wasn’t until 1962 in Journey Into Misery #85. Although he originally was a very strong supervillain, he is often represented as an anti-hero instead.

Loki has made appearances across almost any media imaginable, including several comic series, TV series, and popular movies.

Loki is known as the adopted brother of the powerful Avenger Thor, and the god of mischief. 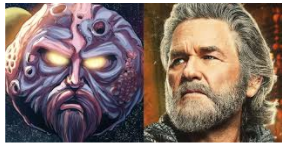 First seen in Thor #132 (September 1966), Ego is the father of Peter Quill (A.K.A. Star-Lord). He is not only a villain but a living planet. Ego the Living Planet is a fictional character appearing in American comic books published by Marvel Comics. He was created by writer Stan Lee and artist Jack Kirby.

Ego is portrayed by Kurt Russell in Guardians of the Galaxy Vol. 2 as the celestial biological father of Peter Quill. His character starts out as kind in the movie, then reveals that he was the reason Peter’s mother died. His fake kindness fades away as his inner villain was exposed.