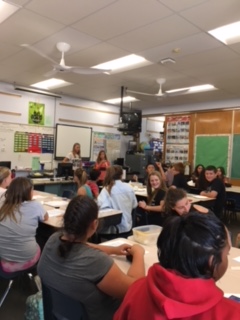 Throughout the years here at Stacey Middle School, there have only been clubs that are for gaming, service hours, dance, etc. But as the years go on, one particular Stacey Middle School student realized that Stacey needed Jesus. She then created a Christian club for students to gather and share their common beliefs.

What even is CFC?

CFC or Cougars for Christ is a new Christian club at Stacey Middle School.

When asked what the club is, Mia Grasse, 7th-grade founder, said, “CFC is a club where even if you’re not Christian you can just come in and, uh, figure out what we’re all about. It’s for the most part pretty religious, we talk about a lot of stories from the bible. But it’s a lot of fun.”

During the club, they participate in many Bible trivia games and prayer.

Wait, aren’t religion and school not allowed to mix?

When many students saw the signs and poster up about the new Christian club, many were confused.

Students, such as Catherine Eagleson, an eighth grader here at Stacey Middle School, thought that the school wasn’t allowed to have a religious club on campus.

“Yeah when I first saw the posters I was like, wow that’s so cool, but wait, aren’t like religion and school work not allowed to mix?

While Catherine and many other students are correct, if the club is after school it is allowed.

Who started the club?

Although many students supported the club, such as the Ferguson family, consisting of Gracie Ferguson, Jackson Ferguson, their aunt, and cousins, the student who technically created the club was Mia Grasse, a new 7th-grade student from Eastwood Elementary.

How many students are in the club and what are the standards to join?

At their first meeting, according to Mia Grasse, there were 36 students who showed up to participate. There are no standards to join, they welcome everybody.

What teachers supervise or attend the club?

The teachers who attended the first and most recent meeting were Mr. Yohn, Ms. Airth, and vice principal, Mrs. Hernandez. Mrs. Airth is supervising this club.

When does the club meet?

The club meets every Friday after school from 3 to 4 pm, in F-4, Mrs. Airth’s classroom.

Can I still join the club?

The club is open to new members at any point in the year. If you do wish to join and participate in this club, come to either Mia Grasse, 7th grader, or to Mrs. Airth in F-4.

What do students think of Cougars for Christ?

“I was wondering when Stacey would finally add this club. Although I’m not a part of it, I have a few Christian friends who would probably enjoy the club and its atmosphere,” says Kira Temple, an eighth grader at Stacey.

When asked Jack Carson, eighth-grader at Stacey, said, “The club is a great addition to Stacey Middle School. It won’t be long until there is a club for other religions too. It’s great to know that there is a place for people to come and share common beliefs.”