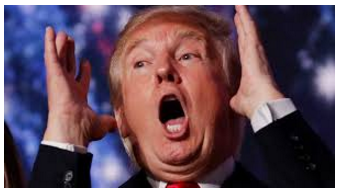 When Trump fired James Comey on May 9, he gave him one threat that may have let some of his secrets slip. “James Comey better hope that there are no ‘tapes’ of our conversations before he starts leaking to the press,” Trump tweeted. When reporters questioned Sean Spicer, the White House press secretary, he said that this was not a threat and there was nothing more to say.

Although Trump did “threaten” Comey, Comey says that he isn’t worried about what is on the supposed tape.

Democratic Reps. Elijah Cummings and John Conyers, the respective ranking members of the House oversight and judiciary committees, requested copies of all recordings of Trump and Comey from the White House counsel Donald McGahn.

The two Democrats wrote this in a letter, “It is a crime to intimidate or threaten any potential witness with the intent to influence, delay, or prevent their official testimony. The President’s actions this morning — as well as his admission yesterday on national television that he fired Director Comey because he was investigating Trump campaign officials and their connections to the Russian government — raise the specter of possible intimidation and obstruction of justice. The President’s actions also risk undermining the ongoing criminal and counterintelligence investigations and the independence of federal law enforcement agencies.”

John Dean, a former White House counsel under Nixon who served four months in prison for his role in the Watergate scandal, said it would be Trump, not Comey, with the most to lose if there were recordings of the two men.

“Obviously, President Trump is confused. He is the one who must hope there are no tapes. Honest people don’t have problems being taped,” Dean tweeted.

It also seemed as though Comey wasn’t the only one being threatened. Due to the “inaccuracy” of the reporters, Trump said that there may be a possibility that there will be no more White House press briefings.

“As a very active President with lots of things happening, it is not possible for my surrogates to stand at podium with perfect accuracy!” Trump tweeted. “Maybe the best thing to do would be to cancel all future “press briefings” and hand out written responses for the sake of accuracy???”

This is not good news for Sean Spicer, the White House Secretary whose job it is, or perhaps was, to conduct these daily briefings. Sarah Huckabee Sanders filled in for Spicer last week and is expected to continue, but not as frequently.

President Trump told Fox News Channel’s “Justice with Judge Jeanine” last week that he was prepared to cancel the daily press briefings unless he did them himself, and only if they occurred ‘every two weeks.’