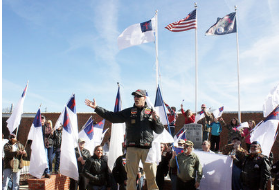 The FFRF (Freedom From Religion Foundation) threatened to sue Rienzi Mayor Walters Williams for half a million dollars if he didn’t have the flag removed from the Veterans Memorial Park.

In response, 100 supporters showed up in the small Mississippi town on Saturday to fight against the removal of the Christian flag.

One protester, Susan Woodruff, states, “As a proud American, but number one as a proud Christian, I came today to stand up for the Lord and stand up for our freedom.”

Sam Grover, a Legal Intern working with FFRF, states, “The issue here is that the Christian flag is not something the government can endorse.”

The same attorney said, “The FFRF would easily win a battle in court if it came to it.”

Williams states that he can’t divulge what step the town plans to take next, but he did say he has hired an attorney to look into it and it will be discussed at the next board meeting Tuesday, March, 7 at 6 p.m.

*Editor’s note – Brandon is a guest writer for the Cougar Chronicle. Guest writers are welcome but must be students at Stacey Middle School.