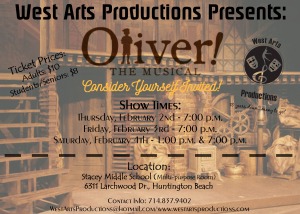 With their winter musical ‘Oliver!’ rapidly approaching on February 2nd – 4th, how could the cast and crew of the show not be excited? Some of the ‘Oliver!’ cast and crew were asked how they felt about their show being about less than a week away. Here’s what they had to say:

“Um, I’m pretty excited. It’s gonna be a really good show. Everyone is doing their best,” said eighth-grader Zane Collinsgru, who is Mr. Sowerberry in the musical.

“I’m nervous and excited, as always, because we will be performing live in front of people,” says seventh-grader, Kira temple, in the role of Bet.

Eighth-grader, Piper Smallwood, who plays the reporter said, “I think that all of our big leads are gonna be great because they have been here forever and learn their lines fast.” Then she said under her breath, “ I just hope we do great.”

“It is very stressful, and we barely learned anything . . . What? It’s true.” said 8th grader, Katie Weir, who plays the part of Dr. Grimwig.

“Um . . . I’m pretty scared, but I think we can all pull through. It’ll be good” said eighth-grader, Shae Thompson, who plays the lead role of Nancy.

Seventh grader, Kylie Brennan, the role of Mrs. Sowerberry, says, “I feel like we need more time to prepare for it, but it’ll be good.”

“I mean… it’s fine? I’m not all too stressed about it. It’s just being on stage being an idiot, just like all the time,” said Deven Nguyen, who plays Mr. Sowerberry.

“I’m scared that I won’t know my lines, but I KNOW all my lines.. because I don’t have many lines, so ya come see the show guys it’s gonna be great… If we remember our lines,” said Caitlyn Timmons.