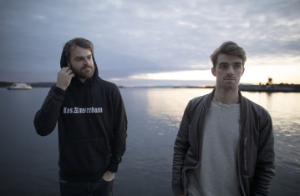 Tenth place: “24K Magic” by Bruno Mars. Unfortunately, this song has gone down for the past few weeks making it highly unlikely that this song will move up in the charts

Number nine is “Don’t Wanna Know” by Maroon 5 featuring Kendrick Lamar. This song will most likely be in the same boat as “24K Magic” which means it probably will not be moving up anytime soon.

In eighth place: “I Don’t Wanna Live Forever” by Zayn and Taylor Swift! This song is fairly new, so it’s highly likely that once the movie it was written for is released, it will become more popular.

Number seven: “Paris” by the Chainsmokers! This song is new to the charts and has been moving up for the short time that it has been on the charts.

Number six is “Bad Things” by Machine Gun Kelly x Camila Cabello. Last time we saw this song, it was in eighth place. As this song earns more publicity, it climbs the charts.

Number five is “Starboy” by The Weeknd featuring Daft Punk! For a long time, this song was number one, but for the eight weeks since then it has been going down.

Number four is “Closer” by The Chainsmokers featuring Halsey! Ah, yes. This song is finally coming up, but it is coming up very gradually. Just wait and see where this song is going to go!

Number three: “Black Beatles” by Rae Stremmurd featuring Gucci Mane! Eh, this song seems to be stuck in the mud a bit. Hopefully, it will become unstuck and get back up there!

In second place, we have “Shape Of You” by Ed Sheeran. Oh no! This song was at number one last week, but it got bumped down no number two! “Bad And Boujee” is obviously still up top and slaying!

Finally, number one is “Bad and Boujee” by Mingos featuring Lil Uzi Vert! My, my, this song is getting a little feisty! Last week, “Shape Of You” was number one on the charts, and it obviously didn’t like the limelight being taken away so soon! How will this end?