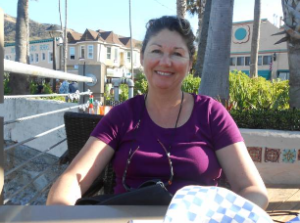 Mrs. Airth is a well known Language Arts and Social Studies teacher. This is her 21st year at Stacey Middle School.

Mrs. Airth’s  full name is Elizabeth Airth, she was born on December 4th, and was originally from Santa Maria, CA, but moved to Seal Beach, CA when she was three.

She used to go to Zoder, which is now a shopping center, McGaw, which is still a school, Huntington Beach High School, Golden West College, Chapman University, and Concordia University.

Mrs. Airth has one half sister ten years younger than herself as well as one daughter, Evangeline, who turned thirty this year and got married October, 23rd. She also had a dog for fifteen and a half years.

She says that here at Stacey Middle School, she is close to Mrs. Dimick, because they teach in F-3 and F-4, both have a lot in common, and that Mrs. Dimick is her #1 buddy. Mrs. Airth also says that she is close to Mrs. Lies because they have gone camping together, Miss Faulkner because she has been Mrs. Airth’s good friend, Mrs. Redmond because she is the leader of the history department and Mrs. Airth respects her greatly, Ms. Walters because Mrs. Airth claims that she is brilliant and hopes to be as smart as her one day, Mrs. DeBritton because they worked here as teachers, and has always supported and guided Mrs. Airth, and Mrs. Gates because they hang out at the pool in the summer.

Mrs. Airth describes herself as curious, because she always wants to be learning new things.

When asked what she looks forward to doing every day at school, she responds with,

“Seeing the students. I want to find a way to make them curious – like me.”

She was originally going to be a chef, but had a college professor tell her that she would have made an excellent teacher.

Let’s talk about her interests! Mrs. Airth’s favorite color is periwinkle, favorite food is Foie Gras, and her favorite animal is a dog.

Mrs. Airth is an amazing teacher who loves to help students learn and should be more recognized for her talent to do so.