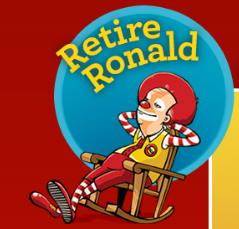 If you have ever been to McDonald’s, you probably know who Ronald McDonald is. He has been the mascot for McDonald’s for nearly 50 years. Well, say goodbye to him because he is retiring.

You are probably wondering – What? How does a mascot retire? Obviously, Ronald McDonald isn’t going to a retirement center. It means that you won’t be seeing much more of him for a while. In case you haven’t noticed, Mr. McDonald has disappeared on many happy meal commercials and toys.

One of the two reasons why he is ‘retiring’ is because kids aren’t getting the nutrients needed. Kids would rather listen to what Ronald wants them to eat, like junk food and ice cream, vs. their parents who encourage them to eat healthier options. And for that reason, Ronald McDonald is linked to an increase of chIldren getting diabetes at a young age, or becoming obese.

The second reason is that there have been recent clown attacks or sightings all over schools and parks. McDonald’s has made a wise decision to have Ronald take a break for a while. Since some people were already a bit creeped out by Ronald McDonald, the clown attacks just added to the anxiety.

Alexandra Gasca says, “I used to hate Ronald McDonald as a little kid. I think clowns are creepy!”

Are you happy that Ronald McDonald is ‘retiring’ or, are you upset that the beloved mascot of Mcdonald’s is going away? Leave a comment or answer the poll below.