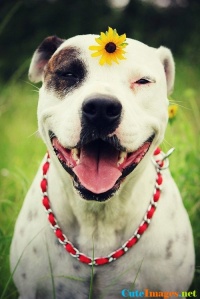 September 27th, a day that will go down in history for the heartbroken owners of loving Canadian pit bulls. Montreal’s city council decided to ban all pit bulls and pit bull-type dogs because of the killing of a 55-year senior woman last June. Mayor Denis Coderre said the law is balanced and drafted with safety in mind. The vote was 37-23 in favor of the bylaw.

Not only will pit bulls be ripped from their home, but they will also be euthanized, simply because of their breed. The individual dog’s temperament will not be considered which has many outraged.

In fact, a neighboring province has harbored this law for several years, and in that span of time, the number of dog bites has increased! “In 11 years, Ontario’s breed-specific legislation has done nothing but tear apart families, dramatically reduce the quality of life of dogs living under the legislation, and, ultimately, take the lives of thousands of innocent dogs. The impact will be no different in Montreal,” affirmed Clare Forndran of Dog Tales Rescue and Sanctuary. Although this tragedy has occurred thousands of miles away, it hits too close to home for animal lovers everywhere.

Although this tragedy occurred thousands of miles away, it hits too close to home for animal lovers everywhere.

“It’s really sad to see those dogs die . . . Because dogs are such great friends,” replied eighth-grader Justin Nguyen, his voice dripping with grief.

Others are concerned about the analytics, for owners wanting to keep their dogs must meet a strict set of requirements. This includes filing for a permit by December 31, spaying or neutering the dog, giving it a rabies shot, and paying a fine of over $200. “Well, that just doesn’t make sense because they already paid for the dog and vet appointments, so it’s really stupid that you’d have to pay just to keep your own dog,” responded 7th grader Lisa Ponti.

Letters have come in from around the world, but it’s not enough.