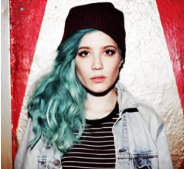 According to Billboard Top 100, this is the hot top ten for September 2016!

In tenth place, we have, “This Is What You Came For” by Calvin Harris feat. Rihanna! They were in seventh place last week, but they are still so, so amazing!! YOU GO, RIRI!!

Ninth place is: “We Don’t Talk Anymore” by Charlie Puth feat. Selena Gomez. It looks like Charlie and Selena have made a comeback! Last week they were at number 13 but made their way back up to 9.

Number eight is “Broccoli” by D.R.A.M. feat. Lil’ Yachty. This song had gone up four places since last week, and it might keep going up in the future!

In seventh place is: “Don’t Let Me Down” by The Chainsmokers feat. Daya. This song has been on the top 100 for 32 weeks! That’s almost as long as hotline bling.

Number six is: “Treat You Better” by Shawn Mendes. This song has been on the charts for 16 weeks, and this week is its peak position! Hopefully, it stays on for at least another week or two.

For number four, we have “Let Me Love You” by DJ Snake feat. Justin Bieber. This song has been on the charts for seven weeks, and this is its peak position!! It might just keep going up!

Number three is: “Cold Water” by Major Lazer feat. Justin Bieber and MO. This song has held third place steadily in their grip, but will they descend in the charts? Who knows?

In second place, we have:  “Heathens”  by Twenty One Pilots. As you can see “Heathen” is not going anywhere because most people on the polls agree this is one of the best songs ever to grace the charts.

Finally, for first place we have: “Closer” By The Chainsmokers feat. Halsey. This song is incredibly catchy! And Halsey’s voice – OH MY GOODNESS! It’s too much. I can’t handle it.