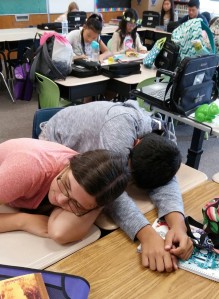 Many people believe that their sleeping habits are healthy. However, this article may prove many wrong and show the real dangers of not getting enough sleep.

The typical amount of hours teenagers usually get are between seven to seven-and-a-half. When in fact, the recommended amount of sleep is nine to nine-and-a-half hours.

When asked, some Stacey students proved lack of sleep is a real issue. Vanessa Luong stated, “I usually get six to seven hours of sleep.”

On the contrary, Katherine Pham responded, “I usually sleep for eight hours at 9 or 10 P.M.”

The causes of lack of sleep can involve puberty, early school times, socializing, or after-school activities.

Puberty can affect the hours you sleep because of the shift in teenager’s internal circadian clock, which is what tells whether they are sleepy or not. After puberty, this clock is shifted to hours later.

This new sleep schedule can prove a rough transition if teenagers do not get used to it. Many teens think that if they sleep in on the weekends, they can fill in the amount of time they lost during the week. However, this is untrue and causes their internal clock to be thrown more off-track. This will make it excessively difficult to wake up during the school week.

Early school times can also be a problem for students. If students are bombarded with too much homework, they can lose sleep hours as a consequence. Furthermore, after-school activities such as sports and clubs can lessen the time a student has to sleep. Many people believe that school should start later during the day, compared to the current time: 8:15 A.M.

A lack of sleep often affects a teen to be moody and make risky decisions. It affects the teen’s academic learning and their memory. Not to mention, being sleep deprived can make a teen more prone to pimples and acne.

Benefits of getting enough sleep involve defending your body against heart disease and diabetes and better immunity to colds and flu.

Some tips to having better sleeping habits are to have a regular exercising schedule and a better diet. Teens should neither have coffee nor partake in activities that excite their senses after 4 P.M.

Don’t forget to take a nap, too! But remember, only under an hour!

Editor’s note: Thanks to Lillian Thai for the title!