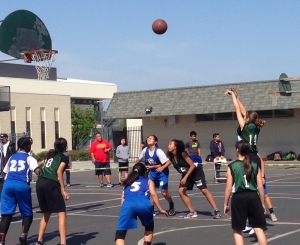 On April 12th, Stacey’s basketball team made a debut at our very own “outdoor stadium” according to Mr. Yohn. After inviting Johnson to play our team, the Stacey boys won 29-27 and the girls lost 12-22.

Although this may be an upsetting defeat for the girls, Heather Tran provided many extraordinary rebounds and Kristine Phan scored the first two baskets in the game. Some students from Johnson also commented that #14 on the girl’s team (Malia Noyes) played very well.

Tiffany Shimizu, an eighth grader from Johnson (#4 on the team) says, “It was pretty good; good job to the Stacey team.”

In the boys game, which was playing simultaneously, the Stacey boys made the first basket. However, Johnson pulled a small lead soon after. Even so, our team won gloriously by the end of the game. Stanley Nguyen was particularly remarkable to according to a Johnson player.

Another eighth-grade student from the Johnson team, Johnny Hall says, “It was a good game, Stacey had really good defense and offense overall. They were a pretty good team.”

Both of the lovely teams played well and the games had a satisfying resolution.

Two days later, April 15th, our teams had a game with Warner Middle School. This time, the games were played at separate times, the girls playing first and the boys second. The score was 40-30 for the boys and 26-4 for the girls teams.

The first game played was packed and enthusiastic. Malia Noyes had the first basket from a free throw while Nikayla Samson also had notable rebounds. The Warner team prevailed playing enthusiastically and well.

Tina Truong, eighth-grade student at Warner and #13 on the team, states, “They [Stacey’s girl’s team] are actually pretty good.”

After that, the boys stepped up to the game and played their own game with Warner. Tyron Do, Huy Trinh, and Logan Puente were found to be remarkable players on our team, even though we experienced the loss. It was noticeable that the Warner team was able to make many baskets from the three-point line.

Philip Nguyen, seventh-grade student on the Warner team (#21), also stated, “It was a great game. We just need to work on our defense and offense a little bit more. They’re a great team and we played a great game.”

The basketball season is almost over, four games have already been played on at our courts.