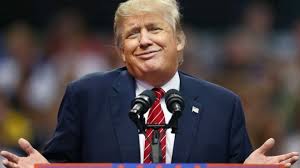 Donald Trump has won over people in New Hampshire, South Carolina and Nevada. Could the rest of the U.S be next?

People may be making a terrible choice, voting for this racist, disrespectful person, or they could be well thought out voters going for the right choice. Although Donald Trump appears racist and does not promote equality among races, he still is a very successful business owner who made a multi-billion fortune from investing out of a “small loan of a million dollars.”

Stacey students have been speaking up about Mr. Trump and what they would do if he became president. “The thing about him that might not be the most presidential is his way of insulting others.  He insults them unprofessionally” says Carol Sanchez, a sixth grader here at Stacey.

It wasn’t much of a shocker to find out that most of them had negative feedback. Alicia Rodriguez, a seventh grader, said, “I would move to Canada”.

Karolyi Thorpe, an eighth grader, said, “…the U.S would probably erupt into war.”

In any case, Trump as the next US president has its pros and cons, and there is no lack of strong opinions about him.

Whether people like it or not, a lot continue to vote for him.