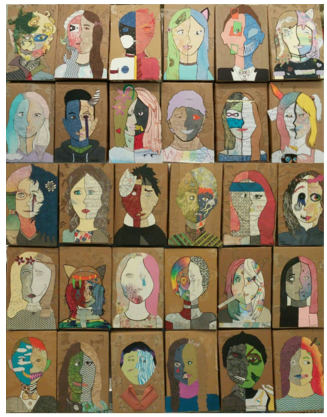 Before winter break, to represent the Picasso style of cubism art, Advanced Art students created recycled collages roughly of their face. The final product included a face split down the middle and composed of collaged pieces glued on a 3D cardboard box.

First, students sketched the shape of their face on a large white piece of paper, and then drew one half of the face as a frontal view and the other half as a profile. They outlined their ideas of how their features would look, creating two moods on either side of the face.

When the rough sketch was finished, it was traced onto carbon paper. Using the carbon paper, the shape of the face, neck and shoulders was traced on a firm white piece of construction paper and cut out.

Students then picked out which types of patterned paper they would use to create a facial collage. The project was multimedia, so many fragments were painted, sketched, zentangled, markered, sharpied, or watercolored. There were many different pieces for hair, skin, eyes, and clothing.

The segments were glued on the white construction paper, which would hold them together. Each portion was carefully cut so the pieces would fit like a puzzle. To distinguish each part, however, a large black sharpie was used to outline every border. This completed the face.

A box cut with exacto knives by students created a two layered background. The face was glued on during the last step, fitting neatly on top.

The project took over a month because each rough draft took time, and the many steps had to be done carefully and with detail.

All Advanced Art projects can be found in Ms. Karsh’s class in H2.