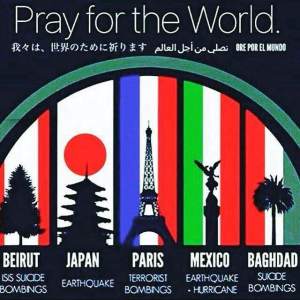 On Friday, November 13th, more than 100 people were killed due to terrorist attacks in Paris, France. Yet, around the world, on the same day, many other countries were affected by catastrophes as well.

Two suicide bombers from Islamic State, or IS, bombed Lebanon’s capital, Beirut. They killed 43 people and injured 239 more. However, a hero rose up and saved many lives from being taken. Adel Termos spotted the second bomber when walking with his daughter. He tackled the suicide bomber and caused an explosion, which took both of the men’s lives, but saved hundreds.

IS also sent another suicide bomber to Baghdad, the capital of Iraq, to bomb a memorial service for Shiite militia fighter, who was killed in battle. The strike killed 17 people, and 43 have been reported injured.

A roadside bomb went off in the streets of Sadr City, a city in Iraq. The explosion killed five people and wounded at least 15.

Northwest of Japan’s Ryukyu Islands, a 7.0 magnitude earthquake shook the country. According to CNN, the National Tsunami Warning Center said, “Based on earthquake information and historic tsunami records, the earthquake was not sufficient enough to generate a tsunami.” No casualties have been reported since the quake struck.

And Baja California, Mexico was hit with a 4.3 magnitude earthquake. Not long before, on Oct. 23, Hurricane Patricia struck the coast of Mexico. The Category 5 hurricane is the strongest hurricane ever recorded at sea. As of now, no fatalities have been reported.